Farmington Elementary School parents were no doubt surprised to see a campaign supporter of mayoral candidate John Barzizza, Aldermen candidates Jeff Brown and Scott Sanders in the Monday afternoon carpool line. As parents waited to pick up their children from school, they were met by a woman carrying a large yellow protest sign that read, “No More Apartments. Vote Barzizza, Brown, Sanders.” 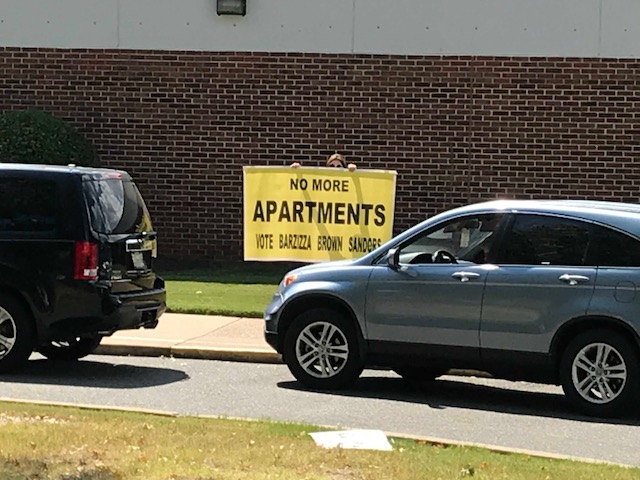 While there is a time and a place to voice your political opinion and support your choice of candidate, it just isn’t appropriate to trespass onto Farmington School property to protest apartments and campaign for John Barzizza, Jeff Brown, and Scott Sanders. We have to draw the line here. This type of political activity goes too far and threatens the very safety of our children.

Having someone wave a large sign in the carpool line distracts drivers at a time when they need to be watching out for children, not political signs. It disrupts the school campus and causes alarm especially in this world of school shootings where we are all very concerned about who has access to our children. No parent wants a disgruntled person to trespass onto their child’s school campus and protest a political issue or push a candidate’s campaign agenda. We never know when such things could draw other protesters, spiral out of control, or even become violent.

GMSD has implemented school policies to regulate campaign activities on school property. Candidates and their supporters are not allowed to bring any political sign onto school campuses except poll workers may hold signs on Election Day. And a candidate’s promotional materials are likewise prohibited from being placed on school premises. That means that candidates for Germantown Alderman may not place their campaign brochures on the cars parked at Houston High School during the season’s first home game or for that matter, any other school campus.

It’s sad to see out of control politics affecting the safety and well being of our schools. We hope GMSD resolves this issue soon and sends a strong message to political candidates that we will not tolerate such disruption to our children’s education.

I’m Terri Harris and my claim to fame is two kids who lead me down the road of parental advocacy. Along the way, I learned that there is at least two sides to every story and somewhere in the middle is the truth. And your truth may not be my truth. But a greater understanding of other people’s perspectives leads to better advocacy. View all posts by Terri Harris