This is a story about how the Germantown Public Safety Education Commission went from McGruff, the Crime Dog to Dean, the Watch Dog and almost became John & Jon, the Twin Attack Dogs…. 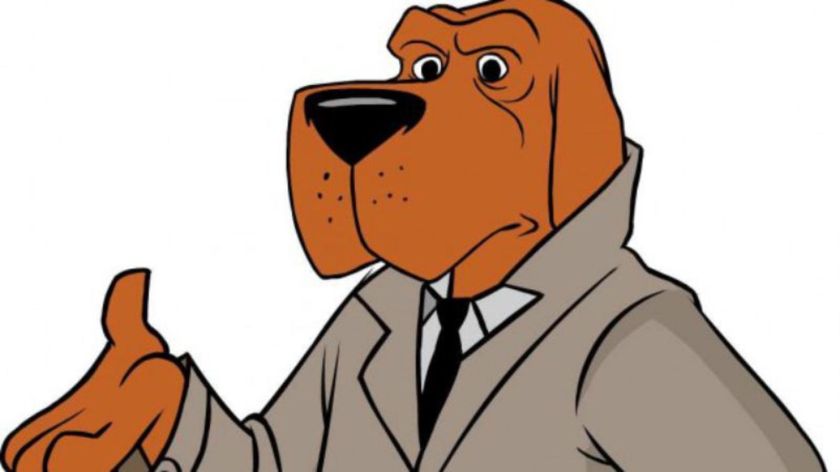 Several months ago, longtime Germantown resident, Al Gabriel came forward with some startling complaints about Alderman Massey, the BOA liaison for the Public Safety Education Commission. As a result, Gabriel, who served as Chair, sent a private request to the mayor and City administrator asking that Alderman Massey be removed.

The Commission is a group of 12 Germantown citizens who serve in an advisory capacity regarding public safety and health issues that affect our City. They provide educational and informational activities including the annual “Take Back Day” for prescriptions drugs, giving residents a safe way to dispose of unused pharmaceuticals.

Gabriel, who has worked with a number of different Aldermen Liaisons over the past several years on the Commission, complained that Massey was using his position to spread political rhetoric and furthering an agenda that involved discrediting the Germantown Police Department as well as City officials. Specifically, Gabriel alleged that Massey insinuated that the police department was not accurately reporting crime statistics and that City officials were manipulating public information for their own benefit. Gabriel went on to say that Massey was demanding details about ongoing criminal investigations, claiming that the Commission ought to be overseeing how the police investigated crime.

So, when Gabriel reported Massey’s conduct, he also requested that Massey be removed as the BOA liaison for the Commission. Massey responded by publicly posting a copy of Gabriel’s email onto his “Massey for Germantown” Facebook page (pictured above) along with this commentary: 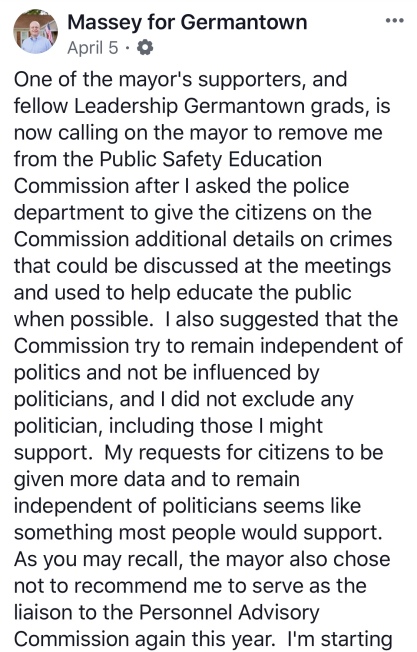 The friction between Massey and the Commission continued to build until a month later, when Massey once again took to his Facebook Page to complain about the Commission. This time, he publicly accused its secretary, Denise Walls, of destroying official records. Walls, who recorded Commission meetings to assist her in writing the Minutes, deleted the recording from her personal device after she finished preparing the Minutes. Massey claimed this was done intentionally to hide the Commission’s activities from the public.  “Without a voice recording, it makes it impossible for the public to know what actually occurred during the meetings. The mayor’s supporters can say whatever they choose to say, manipulate the record and smear any elected officials they choose to smear.”

The problem with Massey’s contention is that commission meetings are open to everyone. Nothing is done in secret, it’s all open to the public. And anyone can record it. Anyone. You can. I can. Massey can. We all can. Alderman Massey and his supporters know that they can attend and record Commission meetings. They know it and they do it.

And that was made clear in Al Gabriel’s resignation letter. “The past few meetings have been nothing more than a series of arguments leading to, what I consider to be, a dysfunctional commission. Mr. Massey is not a voting member of the commission, yet he has continued to argue his way through our meetings.”

Discontent with his limited role on the Commission, Alderman Massey butted heads with the Chair and in a predictable manner, brought politics into the situation, calling the Chair, a “mayor’s supporter.” He calls everyone he doesn’t like a “mayor’s supporter” whether they support the mayor or not. Then, as usual, he launches into a tirade of accusals. So many people, from the police department to city officials to commission member, are all accused of some nefarious wrongdoing by Massey.

And the accusations are unending….

Just recently, Alderman Massey took to Facebook to accuse somebody of throwing a black substance onto the rear bumper of his car. Looking at the picture he posted, it seems like he might have just driven through some fresh tar, probably the result of recent street paving on Poplar. But oh no, he insists that someone did this to him, someone splattered his car and his driveway with a black substance.

Who would do such a dastardly deed?

Why, of course, it has to be the “mayor’s supporters.” Actually, he says, “I can’t prove that this was a malicious act, but since the mayor’s supporters have recently engaged in so many other intimidation tactics, I wouldn’t put it past them. They will only get more aggressive and unstable as we get closer to the election. It’s very sad. Some of the mayor’s operatives are driving around and harassing people….”

There’s more and you can read his post in its entirety below.

Massey’s pointing of an accusatory finger towards “mayor’s supporters” lead one lady to comment, “I dare them to come to my house and try to intimidate me and my family.”

Everyone with an “I like Mike” magnet on their car is a black substance slinging, yard sign stealing, blankety blank…. Public Enemy Number One.

After the resignation of both the chair and the secretary, the Public Safety Education Commission was faced with two vacancies and a pending motion to remove Alderman Massey as the BOA Liaison.

At last Monday’s BOA meeting, Massey recommended John Peyton and Jon Riley to fill the two openings. Interestingly, these two candidates had not submitted applications back when the City initially sought citizens to serve on the Commission. Instead, they applied for the positions after the current vacancies arose and Alderman Massey “picked” them.

So, why did Massey pick Peyton and Riley?

Well, I can say from writing past blogs critical of Massey that these two are extremely defensive of him and will attack anyone who says anything negative about him. I never had a problem with either one of them except when it came to Alderman Massey. They have assumed the role of being Massey’s attack dogs who protect him from any form of criticism. And, their attacks are personal, ugly, untrue, and posted on various social media platforms.

So… Someone dropped the dime on them.

Comments made by these two applicants on social media were apparently copied and sent to the Mayor and Board of Alderman in what seems to have been an anonymous manner. I don’t know. The mayor and BOA may know the identity of who sent the screen shots and are choosing not to disclose the name. Or maybe, it was done anonymously. I really don’t know.

But I do know that some are speculating over whether it was me who told on them. It wasn’t. I did not send anything to the Mayor and Board of Alderman. And neither did anyone in my family, nor did I direct anyone to send anything to the Mayor and Board of Aldermen. I have no problems confronting people directly and demanding an apology for comments made about me. As far as I am concerned, I received an apology, which I accepted, and bygones are bygones.

The Board of Alderman, however, has a greater responsibility. It is their job to see to it that the each of the City’s commissions operates with integrity. When the chair of the Public Safety Education Commission requested a change in liaisons, that matter went before the Commission for a vote. The Commission decided it needed a cooling period and tabled that heated decision until the end of the year.

In the decision not to approve the applications of John Peyton and Jon Riley, Forrest Owens was the most out-spoken of those Aldermen voting against the appointments. He first asked Alderman Massey if he would like more time to consider his recommendations in light of the information that had been provided to the Board. He also asked if Alderman Massey might like to have any other applicants considered for those openings. Massey refused.

Owens, omitting a detailed description, then described comments made on social media as “derogatory.” He questioned whether such behavior by the candidates would be conducive to them serving on a Commission. He expressed concerns over a commission already in disarray being subjected to further controversies.

Barzizza, who voted in favor of both applicants, dismissed the derogatory remarks, saying, “it goes both ways.” “Both sides made disparaging remarks.”

Well, Alderman Barzizza, you should know that you can’t divide a city into sides and expect people to settle down, settle down just because you say so. We can already see the sides lining up after the BOA rejected the applications of Peyton and Riley.

A witch hunt has ensued….

Divorce papers are being posted. Emails are being copied. A search is on for every social media comment ever made. Your “side” is so angry about the rejection of the two appointments that they are on a mission for retaliation. And that’s the very reason that Peyton and Riley’s applications were denied.

The decision to deny their applications was not about someone saying a bad word on social media or even being rude. It was about retaliation. Your fellow aldermen had to do what you lacked the political courage to do. They had to protect the citizens who serve on Public Safety Education Commission and that Commission’s integrity from the fringe element in this City that will ruthlessly attack anyone and everyone who dares to question or criticize Dean Massey.

I’m Terri Harris and my claim to fame is two kids who lead me down the road of parental advocacy. Along the way, I learned that there is at least two sides to every story and somewhere in the middle is the truth. And your truth may not be my truth. But a greater understanding of other people’s perspectives leads to better advocacy. View all posts by Terri Harris

2 thoughts on “Has the Public Safety Education Commission Gone to the Dogs?”