Just to be clear, this blog was created to give a voice to those silenced by the actions of Alderman Dean Massey when he blocked a large number of citizens from the ability to converse with him on community pages like the Germantown Bulletin Board. It appears Alderman Massey has been removed from that page for rules violations. 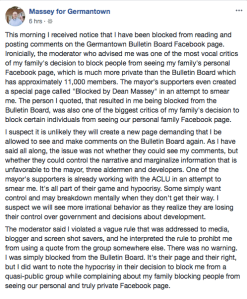 While that is unfortunate, in a recent post on Massey for Germantown regarding his removal, he states that this blog is an attempt to smear him. A review of our posts should be clear that we have only answered statements by Alderman Massey with facts, never have we smeared him.

Alderman Massey also repeats that anyone who responds to his statements with facts are puppets of the Germantown Administration. He accuses us of trying to control the narrative. Unfortunately, Alderman Massey is unable to see that by blocking us, HE is controlling the narrative.

In no way do we intend to smear him or any of his supporters. Our only purpose is to provide a forum to freely answer his statements.

As I have stated publicly before, I have no interest in Alderman Massey’s personal family pictures on his personal page. My problem with being blocked is only with being shut out of the conversation he holds with his constituents. Additionally, by blocking all dissent, he gives the appearance that no one disagrees with his positions which is misleading.

Perhaps he now understands just a bit how all of us feel, being removed from the community conversation, at least in that one social media venue.